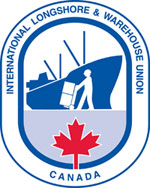 The International Longshore and Warehouse Union (ILWU) Canada has been successfully representing working people in British Columbia since 1948. ILWU Canada is the exclusive bargaining agent for over 6,000 men and women throughout the province. The ILWU Canada is a union made up of the 11 autonomous Locals of the International Longshore and Warehouse Union, and three affiliates: the Retail Wholesale Union (British Columbia), the Retail Wholesale Department Store Union (Saskatchewan), and the Grain and General Services Union (Saskatchewan). The ILWU Canada Longshore Division is involved in the loading, unloading and checking of cargo to and from vessels, and the storage of these goods on the docks and in warehouses. We handle cargo such as: Forest Products: lumber, pulp, craft, woodchips, logs; Bulk Ores: coal, sulphur, zinc, lead, copper, phosrock, potash, pellets; Liquid Bulk: methanol, glycol, styrene, seed oil; Grains; Containers; Break Bulk: steel, ingots and general cargo. ILWU Canada has over a half century of experience, skill, and success in making things better for working people.